As the revolution in the mobile phone market is shifting from gears to overdrive diverse changes in the ongoing fleet is by far, but certain. Today, the market is immensely flooded with more of the mobile tablets than the actual users for the same. The scenario is rapidly changing and is bringing out the best on the best acknowledgments so far. On one hand where all the tablet manufacturing giants have fastened their seatbelts to deliver the best on the best results, new entrants in this sphere are also giving a nod. The only thing that makes these large screen tablet mobile phones so near and dear is the competitive price. There is no paradox in saying that the surge of tough competition has brought about many reasons to smile for all the tech savvies out there.

The new entrant in the ongoing fleet is the widely known electronic giant Videocon, which has stepped in the shoes with its featured Videocon VA75 Tablet. Now, all that really needs to be done is to just sit and gauge that how well does this new sibling in the family performs in the market. Laden with astounding features like latest Android, colossal built in memory, nimble system memory and a power processing gear underneath its hood. Let us check out the detailed specs to understand the complete know how of the newest produce of the company.

Almost all the tablet manufacturers have called in the same slated design of their tablets. Rectangular shape, however, is the new and common design form for any tablet. Something similar was with this very machine as well. The overall built dimension of the tablet stood really sleek and compact while the tapered and well rounded edges promises a sheer handling experience altogether. Apart from this, the front portion flaunted large and bigger 7 inches display screen that promises brighter and brilliant color outputs without any hitch or lag. The 7 inches capacitive touch screen features a screen resolution of 480 x 800 pixels, which is pretty decent in terms of rich contrasting display. Thus, gleeful movie watching experience takes up to new definitions.

A tablet would be just a small piece of box if it doesn’t come laden with appropriate processing gears. Luckily, over here the tablet comes featuring a brilliant 1 GHz processor, which is an outstanding performer of all times. Additionally, the processor takes utmost care of all the processing needs and giving you optimum outputs when you run out to handle multitude application run. Moving on further, the processor is intelligently paired with 512 MB of system memory, which is unfortunately isn’t anything to shout about but still it manages with your needs well. 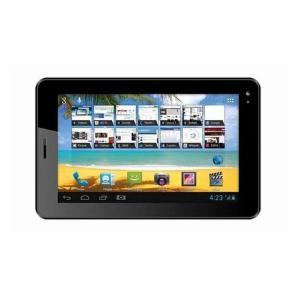 As understood, the tablet is skillfully engineered to run on the latest Android 4.1 Jelly Bean operating system that promises jam-packed access to the Google Play Store and an improved security feature is yet another added advantage of the same.

The built in memory totals to 4 GB that can be further amplified up to gigantic 32 GB via external flash card support. Hence, stocking all your multimedia contents with sheer ease is no more alien when you have a device like this. However, the battery segment also proves out to bag few more brownie coins for the same as it features 3000 mAh Li ion battery that promises a line drawing performance without crying for frequent recharges time to time. Certainly the Videocon Tablet price is completely justified.

All in all, the tablet is among one of the best produces of the company that is brilliantly power packed and astonishingly bestowed. Talking about the Videocon VA75 Tablet Price in India then it is quite really understood that like its peers, the company wouldn’t dare to fix high price of its tablet. Thus, you can get one for yourself without having to pay much or without having to break your banks for the same.

About author:
Piya Gogia takes interest in latest gadget updates and loves to explore gizmos. Being an instinctive gadget nerd, she has already reviewed Videocon VA75 Tablet Price in India, Karbonn tablet, Acer Tablet and many other popular devices. The more she discovers, the more she writes.